Exediron wrote:Whole buncha duds on those bonus points for pole... 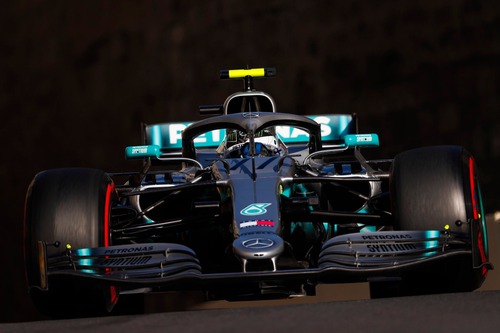 
Azerbaijan The fastest street circuit in formula 1. A track that hasn’t been on the calendar long but has delivered some memorable races. Would this year be any different ???

In practice it was an all Ferrari 1-2 as the boys in red were flying around the circuit. More specifically the pony of Charles Leclerc was looking like the car to beat to pole as his confidence grew the lap times dropped. While Vettel was his closest contender he didn’t look as comfortable in the car as leclerc did. But what about the mercs???,

Well In qualifying the mercs finally showed up as both drivers were unleashing their true potential which wasnt present in any of the practice sessions. As the quali session unfolded so did the Ferrari of Charles Leclerc whom crashed out in fp2. Another heart breaker for the youngster as he was on track to lead the charge against those pesky mercs. In the end it was another merc 1-2 lockout with bottas clinching pole.

On race day both mercs got off to a great start with Hamilton pulling right along side bottas. The drag race was on through the first two corners but bottas would hold station leading the race with Hamilton behind. As the race unfolded the race pace of Charles Leclerc on the medium tires cane alive as he pulled off an amazing first stint and lead the race for a good portion while the other front runners pitted but the strategy became unclear as he was left out on track only to watch his lead disappear as the safety car never came, With his tires fading away so did his hopes of a podium. As he was over taken by the top 3 drivers in the race and when he finally did pit he was 20 seconds adrift of 4th place holder Max Verstappen with 16 laps to go. What could have been Charles ???? Upfront bottas drove a flawless race and held off his teammate to secure yet another merc 1-2 finish.

Congratulations to Icemanjee1 for winning the Baku GP!!!

Meeeeeaaaaannnn while back on our leader board Icemanjee1 has continued to lead the way building a nice 42pt cushion to the defending champ Bancieri. We also have a new front runner in Mayhem who enters the top 3 for the first time this season but in the shadows lurks the former champ exediron whom is no slouch in this competition looking to claim a seat at the table. What new upgrades will Barcelona bring???? 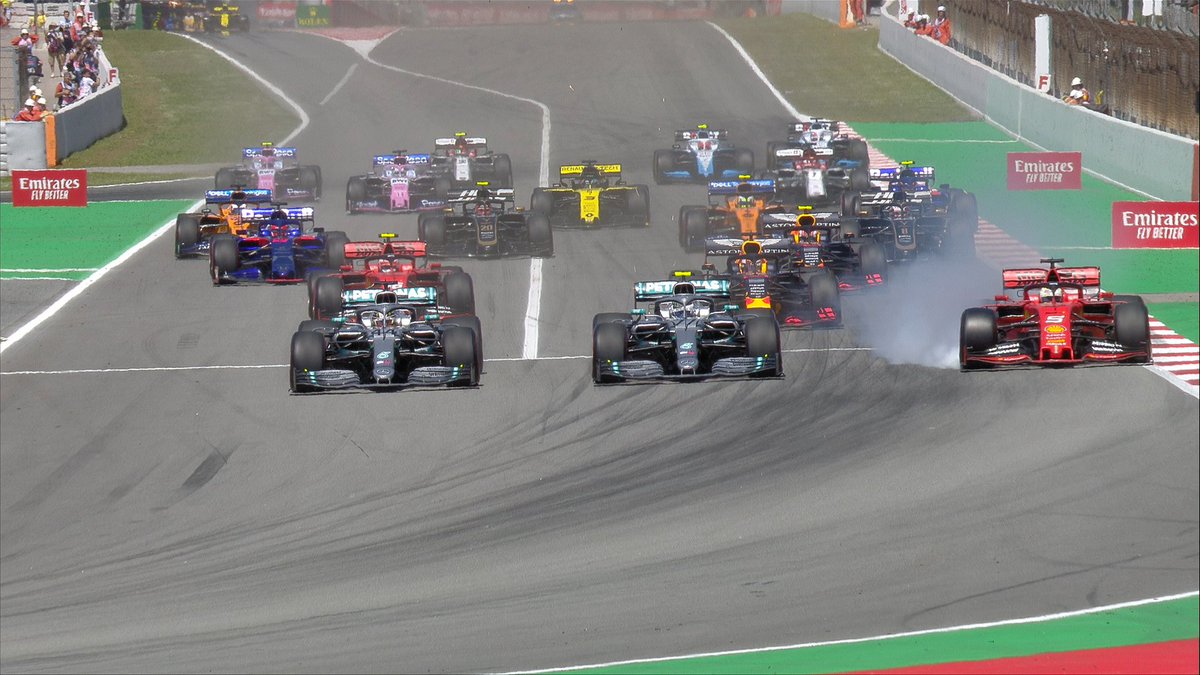 
Circuit de Catalunya home of F1 winter testing. A track that shows us what teams are leading the development race and who needs to keep working on those upgrade packages.

In practice Valterri bottas set the tone early and kept the momentum rolling his way he had a comfy margin over the boys in red. The mercs looked sharp to say the least and Ferrari were left scratching their heads at the time sheets.

In qualifying it was yet another merc 1-2 with bottas leading the way as Hamilton couldn’t get all the pieces together for this one as bottas clinched yet another pole with a possibly the best lap of his career.

At lights out it was a quick get away by Lewis Hamilton that saw him leading into turn one as bottas got squeezed which narrowly saw him lose the rear as he defended against vettel. Unfortunately for us that was about all the excitement as everyone held stations after that. Some good fights in the mid field with haas making some progress, home town hero sainz beating Riccardo into the points and notable mention to kvyat for a strong performance.

In our race however the scores were pretty good with many team well in the points this round but one team had much better upgrades then the rest of us netting them 8/10 correct predictions and clinching the first major bonus of the season.

Congratulations to bancieri for winning the Spanish GP

Meeeeeaaaannnn while back on our leader board bancieri has not only clawed back the 42pts he was down but extended his lead over the field by 48pts. We might have to get the marshals to inspect that mysterious exhaust smell coming out of that garage

. Great job to Bancieri and for the rest of us we need the factories working double time as the midfield is extremely tight!!!

Congratulations on nailing those! 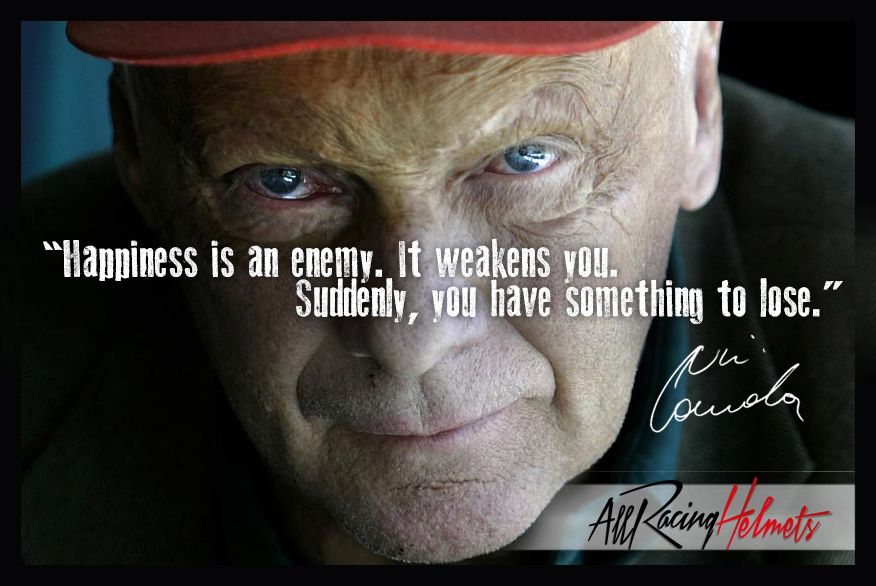 “I was not interested at all in Formula One when I left; I was very busy with my airline. But slowly I started missing the adrenaline rush and the driving of such fantastic cars at the limit. In reality this urge never disappears when you're a top driver, because I think we're a different breed of people, we need to take chances, we need to push ourselves to the limit all the time, that sort of thing. It stays with you, although you can kill it by losing motivation or other things in your life, but it never leaves you forever.” Nikki Lauda


It was a sad week in motor sports with the passing of Nikki Lauda a 3x Formula World Champion (75,77 & 84). A man whom needed no introduction because he was a man amongst boys in the current paddock as he walk around. A true legend and whether you liked him or not you respected him.

I don’t know about you guys but to me Monaco had a different feel this year. Maybe due to Nikki passing leading up to the race but the drivers looked keen on making this one really count.

The Mercedes camp wanted to win this one for sure. Special Tributes were up and down the paddock but for Mercedes it was personal. In practice the silver arrows looked miles ahead of the field in a circuit that many called their Achilles heel but you wouldn’t know it this year as the merc was hooked up rather nicely with both drivers trading fastest laps.

Heading into qualifying Mercedes continued the performance but it was bottas who was in a much better rhythm. As the session came to a close Hamilton came out on top by the smallest of margins just edging out his teammate by .086 of a second.

On race day the mercs with another front row lock out looked to have it in the bag until questionable tire strategy put the lead at risk. Hamilton with no front grip left was to hold off the charging bull of Max Verstappen who was constantly filling Lewis mirrors with blue. Max would chase Lewis to what seemed like forever just lurking in the shadows waiting for a mistake but it never came. So close yet so far was Verstappen who at times looked to be lining up a pass in the hairpin but wouldn’t risk it there. The attempt came at the turn 10 chicane where mad max tried to send one in late but the Honda engine still lacking the grunt wasn’t close enough for such a move allowing Hamilton to fend off the attack and secure the win for silver arrows.

A 100% prediction of a Hamilton win was across the board meaning everyone got that 10pt bonus but only 1 team captured the bonus of predicting all race events correctly giving them the win.

Meeeeeaaaaannn while back on our leader board Bancieri continues to lead the way extending his lead by 10 points over his main rival Icemanjee1. Big mover this round was Jn23 moving up 2 spots claiming 3rd knocking mayhem out of the top 3

Happy with my best placing so far but didn't make anywhere near enough of an improvement to move up the leaderboard.
Top

great job on nailing the race events, your faith in gasly paid off. Monaco isn’t an easy race to predict

toda11blue wrote:Happy with my best placing so far but didn't make anywhere near enough of an improvement to move up the leaderboard.

Mayhem wrote:Unlikeuday Cutting it real close as the entry would have been invalid at 1:50....

Better than me, since I forgot to submit mine at all...

Mayhem wrote:Unlikeuday Cutting it real close as the entry would have been invalid at 1:50....

Better than me, since I forgot to submit mine at all...