I think every time I've picked Nico to win he has - he should start paying me on the side!

Things are looking juicy going into Brazil - could we see a switch in the lead of the team championship?

The way I have been picking I'm certainly frightened of a change!!
Top 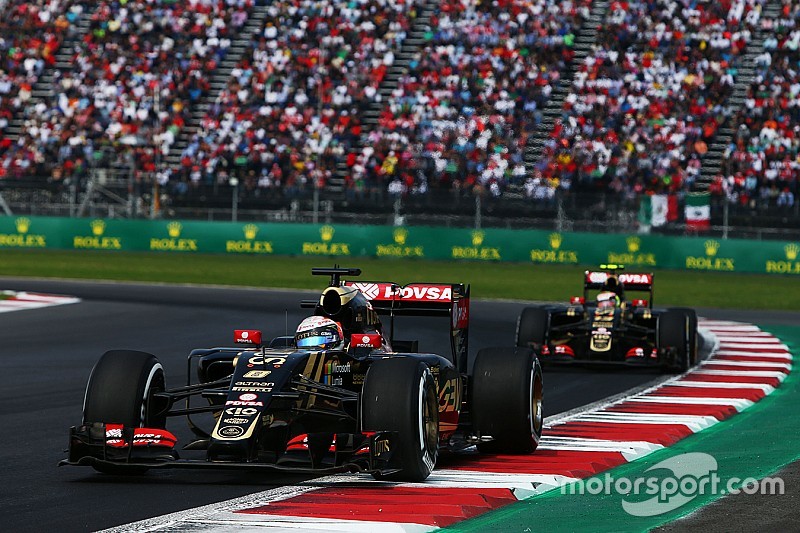 F1 returned to Mexico for the first GP since 1992 and what a fanbase we missed out on for 22 years!

After 71 laps of limited grip and top speeds of 225+ mph it was Valtteri Bottas who claimed 3rd spot on the podium, Lewis Hamilton took second place but it was Nico Rosberg who took his 4th win of the year.


With two rounds to go the top 8 are still in contention for the title, but the closest battle is between the top 4 after Exediron capitalised on the top 3 not scoring that round to move only 15 points behind the leader jimmyj. With GPG 6 points behind and Saz 10 points behind this looks set to go to the final round.


In the teams standings things are closer than ever with a tight battle for both 1st and 3rd place. This championship also looks set to go to the wire, take that F1

I am going away on holiday later this week and wont come back until the week after the Brazilian Grand Prix so expect an update on the weekend of the 21st/22nd of November, ready for the final race the following weekend.
Top

Go bold or go home, as they say!

You heard it hear first!!
Top

Have a feeling this might be a bit of a topsy-turvy grid so....

Edit: forgot to put the race

The two most powerful warriors are patience and time…so remember: great achievements take time, there is no overnight success.
Top

Brazil
1.Rosberg
2.Hamilton
3.Massa
This circuit is interesting because it has inclines and declines. Not just up, but down as well
Top

Changing my prediction to a bold one.
Top

Gonna be a pretty exciting race for our little competition, with the possibility of the championship being clinched here! Rosberg's form will be the deciding factor at the top, with a 100% confidence rate for a Vettel podium amongst the championship contenders!

It is very exciting! I think Nico may take out Hammy and Seb in the 1st corner and we're all screwed. LOL.
Top

Well, so-so race, but I liked the result!

Bring on Abu Dhabi and the championship showdown in the desert.

Hats off to my partner Mayhem for saving our butts.
Top

Ohh, sorry I forgot about Brazil

Any updates on the last one?
I don't rely entirely on God

mcdo wrote:Any updates on the last one?

Soon, I got back yesterday and will update Monday at the latest if I don't get chance to do it tomorrow afternoon/evening.
Top

mcdo wrote:Any updates on the last one?

Soon, I got back yesterday and will update Monday at the latest if I don't get chance to do it tomorrow afternoon/evening.

Thank you! Much appreciated as always. This is going to be an exciting week coming up!

Looks like we are set for a big finale (in our championship at least). In a race where everyone but the Ferrari's were lapped (

For us that meant a wide variety of scores which ensures that both championships will go to the last round.

So as we go into the last round GPG has taken a commanding lead of 7 points over jimmyj. Exediron also had a good round, moving into 3rd, just ahead of Saz who is also still in contention for the championship.


No Limit Excedrin Racing scored a double perfect podium in that round moving themselves into 1st with a lead of 8 points over F1 Mayhem.

F1 Mayhem may be able to take advantage of the fact that the two No Limit entrants are also battling each other for the singles championship in the final round.

So its finale week and both championships are down to the wire. I will post a summary of the championship contenders in a moment.

NOTE: I am quite happy for the championship contenders to PM me their picks for this week and I will then post them myself after the 8.00pm deadline on Friday.
Top

Championship contenders going into the last round

Reigning champion GPG is looking to defend his title and holds a commanding lead of 7 points over his nearest rival jimmyj. Exediron and Saz need nothing short of a perfect podium in order to win the title and also need to hope GPG doesn't score highly.

No Limit Excedrin Racing holds a slim advantage over F1 Mayhem going into the final round. Reigning champions Force Indian Takeaway are now out of contention for the title in 4th place currently.

This is one to watch closely as contestants focusing on the singles standings may cost the team championship.
Last edited by Black_Flag_11 on Sun Nov 29, 2015 3:18 pm, edited 2 times in total.
Top
Post Reply
640 posts