Marklar is once again collating driver ratings from what he sees as the more major and important publications or websites... 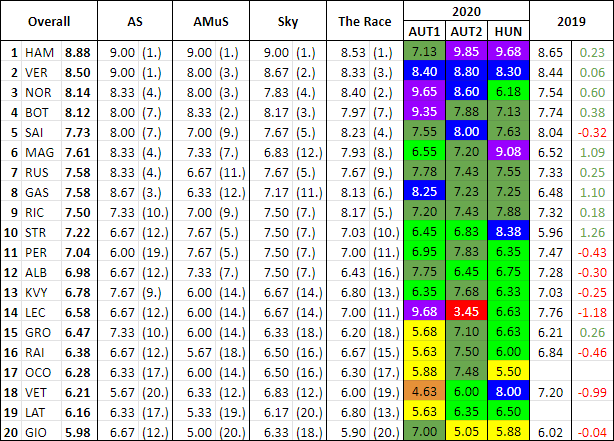 Of course, there are also ratings given here at PlanetF1 and plenty of other ratings from other websites which we could average out, and we can also discuss our own ratings.

Last year, on the whole Hamilton had a slight edge on Verstappen for top spot, but the mass fanbase which is probably best accounted for on F1 Hot or Not and for awards like the official F1 Driver of the Day had a preference for Verstappen. Here I tend to have a greater respect for the ratings from journalists and so on than the average follower but this isn't always the case - for example, when it comes to game scores on metacritic.

So anyway, there ya go.
Top

thanks for posting. V interesting.
Top 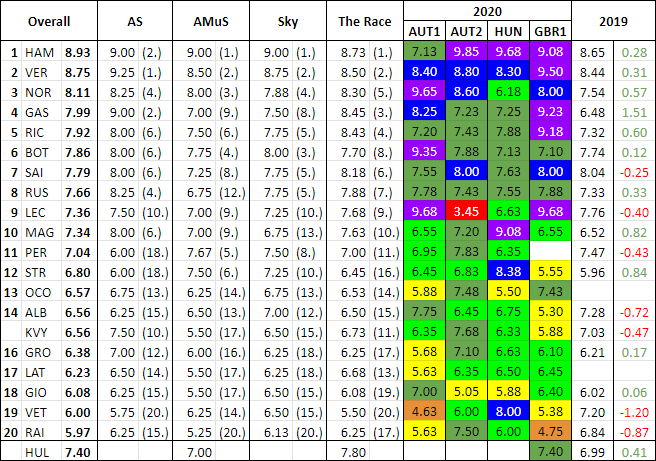 Do you agree or disagree with Edd Straw's rating for the British GP?

@Invade - how do these ratings work?

Yeah, those columns are the driver ratings averaged out for the season so far from those publications, and the overall is those 4 AS/AMUS/Sky/The Race scores averaged out. The scores for individual races are the average score of those publications for that particular race. The 2019 columns represent the overall score the driver achieved in 2019 and how much better or worse they're doing in 2020.
Top
Post Reply
6 posts • Page 1 of 1