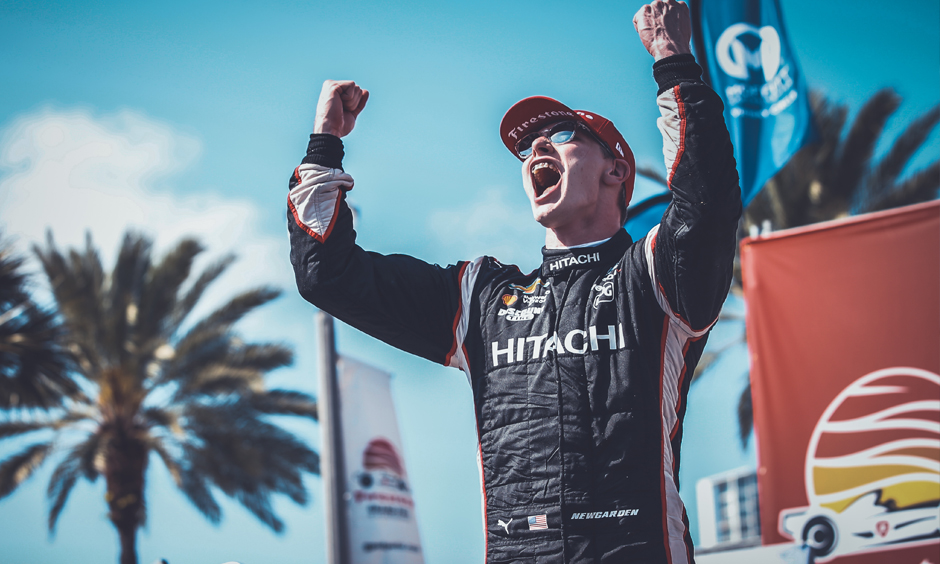 I am sorry for all Indy Car fans who had trouble live-streaming due to the fact that NBC has picked up the full coverage of Indy Car now that ABC is no longer broadcasting races. But now. Here is the report:

Traffic and redwall tires paid off for Josef Newgarden spoiling Will Power's dominance to take the win at the Grand Prix of St. Petersburg besting the defending champion Scott Dixon by 2.9 seconds. Last year's Indy 500 champion Power took the last podium spot. But Felix Rosenqvist was the best rookie at the finish with a 4th.

After taking the pole, Power made a great escape at the start with Rosenqvist out braking Newgarden in the 1st turn. Last year's winner Sebastien Bourdais for a 3rd win at St. Pete went out in flames after his right rear brakes was caught on fire at the Turn 10 curve in lap 11. Ryan Hunter-Reay lost his engine on lap 20 at the 1st bringing the 1st caution of the race. At the re-start on lap 22, Rosenqvist played catch-up with Power taking the lead on lap 24. But Ed Jones spoiled his extended lead when he met the wall right at turn 9 before he was struck by the #4 AJ Foyt car of Matheus Leist to rub his left rear into Jones car. Felix would lead another 18 laps when traffic became a factor. With Power, Dixon, and Rosenqvist already getting service, Newgarden stayed out until lap 51 when he came in. Instead of taking blackwall tires, Josef took new reds instead that would pay off for the next 29 laps as the leader earning him the win.

Alexander Rossi was a non-factor with a 5th place finish with James Hinchcliffe finishing 16 seconds behind Rossi. Simon Pagenaud took 7th. Rookies Colton Herta and Santino Ferrucci made excellent strides on their debuts with Herta finishing 8th (Well.. for Herta in his 1st race), while Ferrucci (In his 3rd race) became the biggest mover of the race up 15 positions for a 9th place finish. Jack Harvey brought a 10th for Michael Shank Racing.

Indy Car will make a trip to Austin for the Inaugural Indy Car Classic at the Circuit of the Americas.

by Tassadar
Darn it! I missed it. Gonna have to keep better track of Indy car dates.
All times are UTC
Page 1 of 1