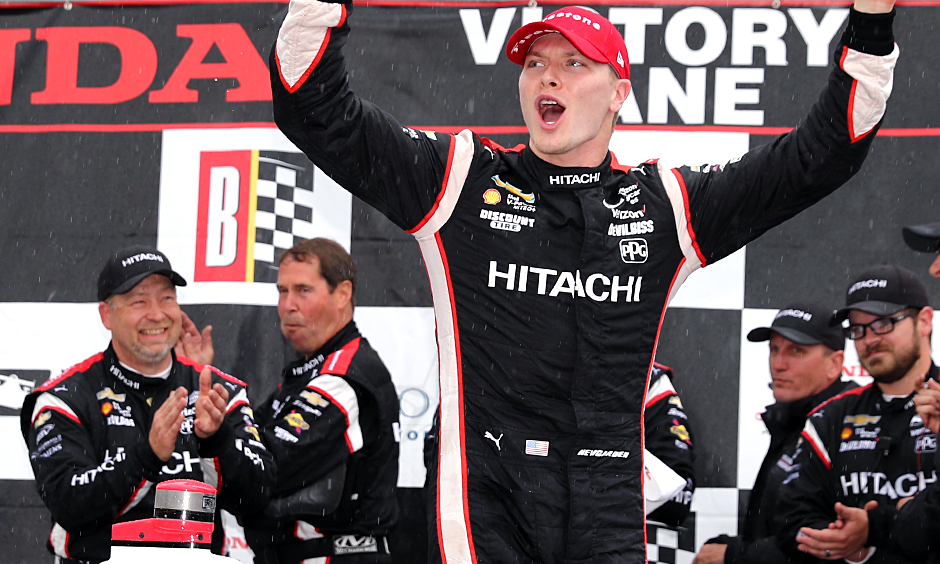 This past weekend at the Barber Motorsports Park in Birmingham was given a curveball - a weather problem. And it took a 2nd day to get a race completed with Josef Newgarden earning his 2nd win of the season going back-to-back and the 1st 3-time Grand Prix of Alabama winner just as the began to pour in. Ryan Hunter-Reay and James Hinchcliffe would sealed the final podium spots.

At the beginning of the event, track marshals asked for an early start. and if began with a huge mist for all the 23 starters. Trouble began with Charlie Kimball after he slid his car nose-first on lap 10. Then the rain began to pour in heavily and by the start of lap 16, Will Power lost control or his car causing to crash into the wall breaking his front suspension. The race was red-flagged before track officials decided to suspend the race after 26 laps.

The race would get re-started with sunny skies. Just when they were about to get the green, Max Chilton's Carlin car would stall right after turn 4. But the race finally re-started on lap 32 and it was all green through the rest of the day on a timed race. By lap 66, rain drops began to fall again forcing drivers to make last-ditch decisions, and Newgarden was the 1st to take wet tires while the track was still moist right before it began to rain. And it was good-bye pit strategy as all of the drivers who gambled decided to stop for wet tires.

Robert Wickens earned his 2nd top-5 finish with a 4th, followed by Sebastien Bourdais in 5th after holding a late charge by Scott Dixon. The Rahal-Lettermam-Lanigan pair of Graham Rahal and Takuma Sato finished 7th and 8th respectively wih Simon Pagenaud and Marco Andretti filling the Top-10. But it was a total disaster for Alexander Rossi who gambled with his tires in which he would go off-track. As a result - Newgarden takes over the points lead by a mere 13 points over Rossi. Bourdais moves up 1 spot to 3rd, followed by Rahal with Hinchcliffe completing the top 5.

The Indy Car drivers will now have a break until the middle of May where they will be at the Indianapolis Motor Speedway for the road course event right before the 500.

Re: Indy Car - GP of Alabama

It was an interesting race as the rain made it a bit of a crapshoot for even the most skilled of drivers. Will Power, one of the best road racers in wet or dry conditions hydro-planed into the wall while side-by-side with Bourdais in a battle for second. Interestingly, there was a real concern that Newgarden may have done in too early for those were as they can be used up in three laps in dry to moist conditions, but then it started raining harder. Good call by the Penske gang. All of that said... Newgarden was the dominate force all weekend... Dry or wet.
Forza Ferrari
WCCs = 16
WDCs = 15

Re: Indy Car - GP of Alabama

Blake wrote:Interestingly, there was a real concern that Newgarden may have done in too early for those were as they can be used up in three laps in dry to moist conditions, but then it started raining harder. Good call by the Penske gang. All of that said... Newgarden was the dominate force all weekend... Dry or wet.

Indeed: I'm in the camp of firmly believing that they did pit too early, he just had such a huge gap built up from the earlier part of the race that they could afford it. He lost seconds a lap to the cars still on dries immediately after he pitted, and he said in his post-race interview that he had mostly burned through the tyres before it turned really wet.