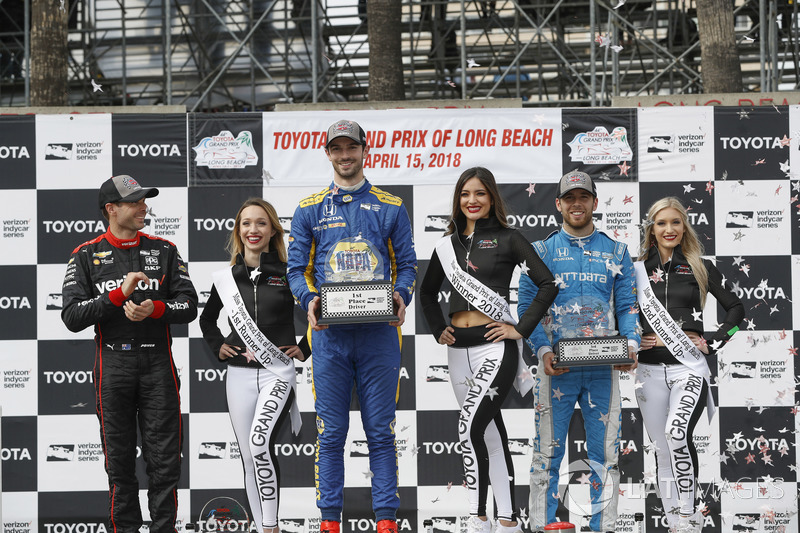 I could consider the 44th Edition of the Toyota GP of Long Beach with 2 words: RUTHLESS AGRESSION!!!

This is how Alexander Rossi described it when he finally put his 2017 disappointment behind. Rossi took this race with authority by forcing Will Power to overuse his push-to-pass turbocharger enroute to take the victory of his lifetime. His 3rd win of his career thanks to pit strategy and a yellow that made the difference. It is Rossi's 3rd straight podium.

The start of the race had a shortcoming when heading to the 1st turn at the Aquarium. Graham Rahal poked into the Penske of Simon Pagenaud right into the wall damaging his left rear. Ganassi's Scott Dixon bumped into Ryan Hunter-Reay's front wing causing to be sent for a replacement. Rahal took a drive-thru penalty that sent him to the back.

Rossi would dominate for 25 laps before pit service thus relinquishing the lead to Power and Hunter-Reay right before Rossi taking the lead back. Tis all before the Juncos #32 car of Kyle Kaiser went off course causing him to stall bringing the 2nd full course yellow. At the re-start in lap 46, Rossi increased his lead thanks to slower traffic. But on lap 47, Sebastian Bourdais was in a battle with Scott Dixon for 2nd. In a bold move, Bourdais went into the pit-exit lane passing Dixon and 2 lapped cars to inherit 2nd. Righ before he was issued a penalty for the illegal pass thus relinquishing the position. But then he made a clean pass on the next lap. Robert Wickens day was a one to forget when his ECU just kept shutting off.

Rossi would later relinquish the lead once again on lap 56 giving Bourdais the lead with Dixon pursuing. And just as Bourdais and Dixon were about to get service, Bourdais' teammate Zachary Claman De Melo met the wall on Turn 9 causing a full course yellow. But it was too late when both Bourdais and Dixon entered on a closed pit. As a result - Bourdais had to re-start from the back while Dixon had to take a drive-thru after the re-start. Bourdais' day would get a lot worse when the Ed Carpenter Racing car of Jordan King just as he was passing the SPM car of James Hinchcliffe tapped int Bourdais' car spinning him around with Hunter-Reay and Wickens bumping into each other.

2017 Rookie of the Year and UAE based Ed Jones earns his 2nd career podium since his 3rd place finish in the Indy 500 with his 2nd 3rd-place finish. Zach Veach becomes the highest rookie finisher with his 1st top 5 finishing in 4th after starting 16th.

With his win, Rossi becomes the new series points leader with a 126-104 point advantage over Newgarden. Rahal recovers for 3rd with Bourdais in 4th, Hinchcliffe 5th, Dixon is 6th. Hunter-Reay, Power, Jones, and Andretti round out the top 10 as they head out east for the Honda Indy GP of Alabama this Sunday.

( My apologies for the double-post. Just wanted to provide the results and how it went down )
Top

Thanks for the posts Placid
Top

Depending on the half-way point, I will see if it is worth placing Rossi as part of the F1 Silly Season 2019.
Top

Placid wrote:Depending on the half-way point, I will see if it is worth placing Rossi as part of the F1 Silly Season 2019.

While I think F1 teams missed a step by not signing Rossi I don't see him passing up being a front runner in Indy to run in the mid-field in F1.
{Insert clever sig line here}
Top
Post Reply
4 posts • Page 1 of 1