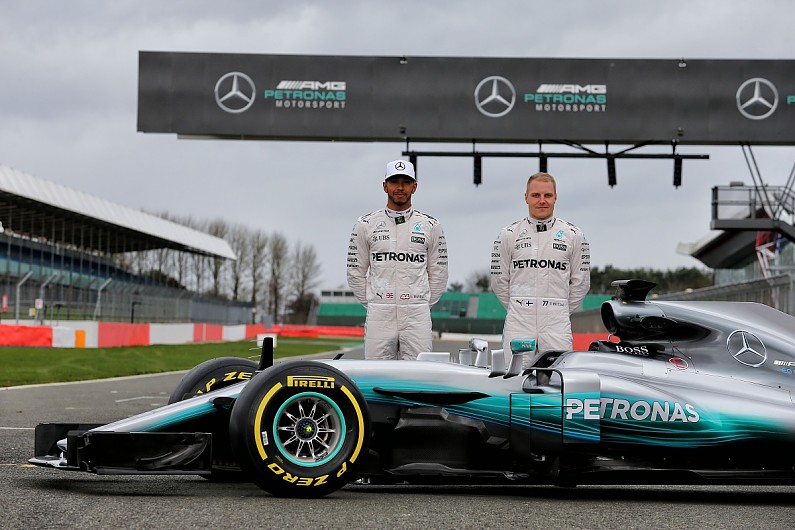 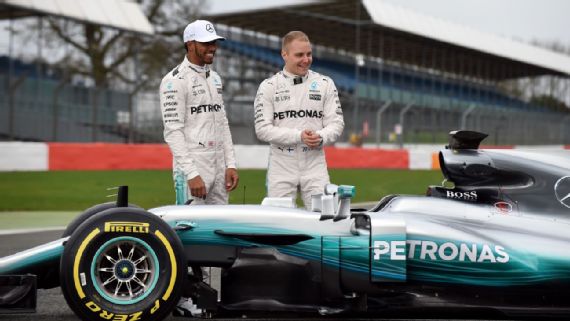 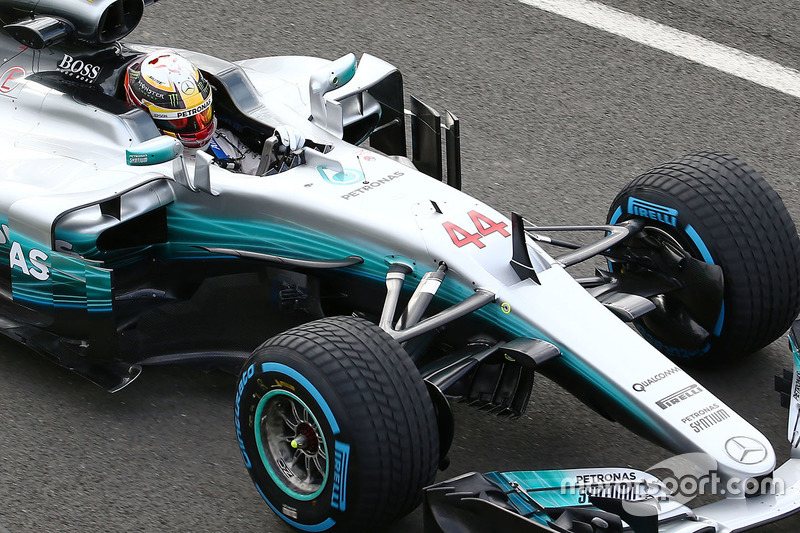 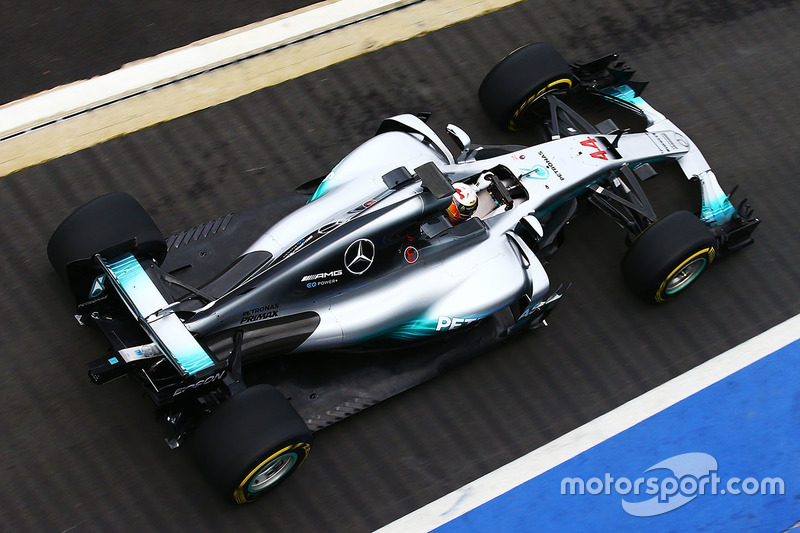 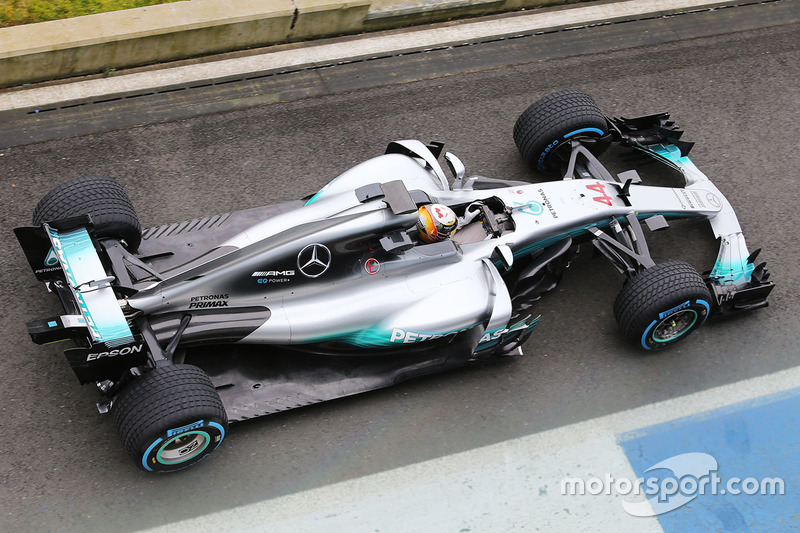 Don't know about fantastic but quite nice. Best so far at least.
Räikkönen - Vettel - Bottas
Thank you Nico - You´re the champ!

Here we have no sharp edges and smooth transitions like they were made from silk.
There is something about beauty and sexyness that make the cars go fast...

No idea what the other teams are doing but they are using their CAD/CFD softwares wrong(except RedBull and ToroRosso).

The more I look at it, the more I like it.... no over the top shark fin and the livery works well.
Alfa Romeo Racing

Very boring livery as usual from mercedes but the car itself looks nicer than anything so far. With the massive advantage they will continue to enjoy in the PU department, no one will catch them this season.
Top

This one is better Don't worry, they will turn down their settings to not scare the opposition.
"Fake" fights will occur like we have witnessed with Lewis and Nico.
Top

A quote from Force India technical director r.e 2017 Merc PU "Mercedes HPP [High Performance Powertrains] have done a fantastic job over the winter and made another unprecedented step. It is impressive." The writing is already on the wall for another boring season dominated by mercedes.
Top

I hope its not as fast as it looks
Top

Too early to tell, but speculating, the wheel base seems extremely long. The other teams will be hoping Mercedes has gone too far in this decision and it proves the wrong one.

The sidepods are also extremely small, and again, the other teams will be hoping that the very tight packaging translates to unreliability.

But that's just me hoping 2017 is not just another year where Mercedes run away with it. We'll see.
Top 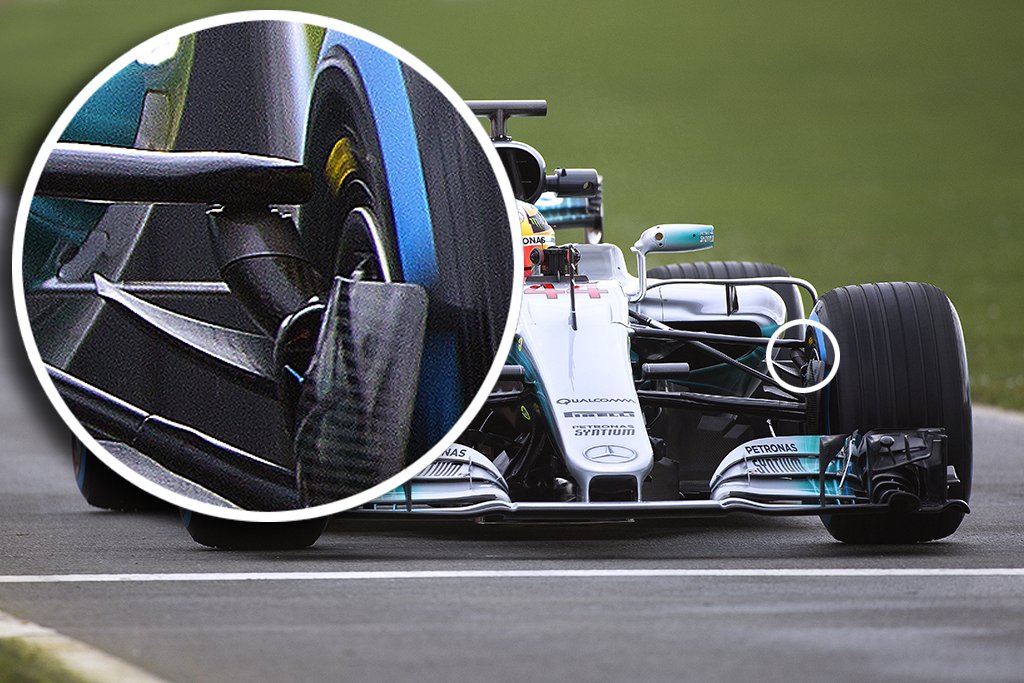 looks good but rear wing quite plain . force india has a beauty
Top

Best looking by far so far. slide wrote:looks good but rear wing quite plain . force india has a beauty

toto wolff "spectacular is how the 17 cars will look." um, nope
Top

First car this year to give me a hard on.

Looks so much more the finished article that the others.
Top

The best of the current unveilings. I like the rear wing and the floor area around the back. Sharp!
Top

A small progression on the livery, wasn't expecting much more TBH. But I definitely, definitely like it.
Top Three Team Champions 2017 (With Jezza13)
Group Pick 'Em Champion: 2016 & 2019
Top

She look's very slick! think Lewis in up for another crown.
Top

If only the front wing was the same dimensions as last year.......

But the car still looks beautiful.
"No, there is no terrible way to win. There is only winning."
Jean-Pierre Sarti
Top

SnakeSVT2003 wrote:If only the front wing was the same dimensions as last year.......

But the car still looks beautiful.

SnakeSVT2003 wrote:If only the front wing was the same dimensions as last year.......

But the car still looks beautiful.

Indeed, but it's still a giant wing. IMO the car would look sexier with a smaller wing.
"No, there is no terrible way to win. There is only winning."
Jean-Pierre Sarti
Top

So this is a sneaky little trick if it stays there...

Blackhander wrote:So this is a sneaky little trick if it stays there...

Apparently they will be trialling a shark fin at Barcelona too, to see what works best.
Top

Blackhander wrote:So this is a sneaky little trick if it stays there...

That's the type of WTF? we were expecting with McLaren.

Mercedes stealing their thunder all over the shop. Would be hilarious if it's just something Mercedes stuck on to get all teams furiously designing their own version only to find out it does nothing.

"Clark came through at the end of the first lap so far ahead that we in the pits were convinced that the rest of the field must have been wiped out in an accident."
-Eddie Dennis, describing the dominance of Jim Clark in the Lotus 49 at Spa 1967
Top

Ok so the upper suspension arm is connected via a carbon fibre tube... Could this be implying that the upright itself is actually significantly built up from carbon, that would be a massive improvement if so?

This complex upright is driven by the location of the suspension arms, located noticeably higher at the chassis. Photo of last year's W07, and the upper A arm is located at least 10 cm below the top of the nose section. 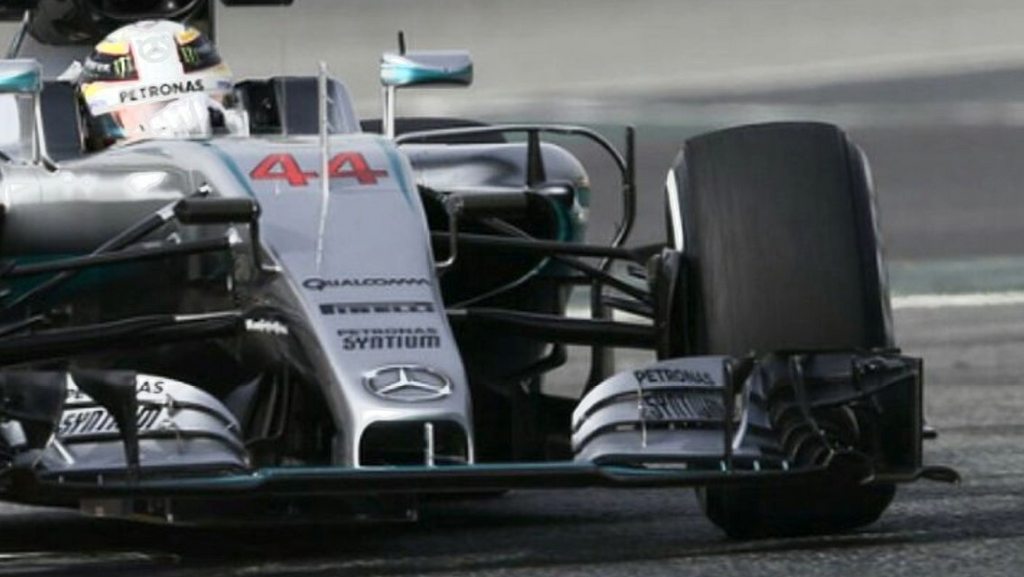 Of course it it much too early to arrive at any meaningful conclusion, but IMO Mercedes have decided to embark on more of an evolution of the W07 than any radical major changes. If this is true, it is possible some other team could leapfrog Mercedes in performance with a design taking full advantage of the new regulations. Brawn did it, others hope to realize they can steal a march on Mercedes.
Only dogs, mothers, and quality undergarments give unconditional support.
Top 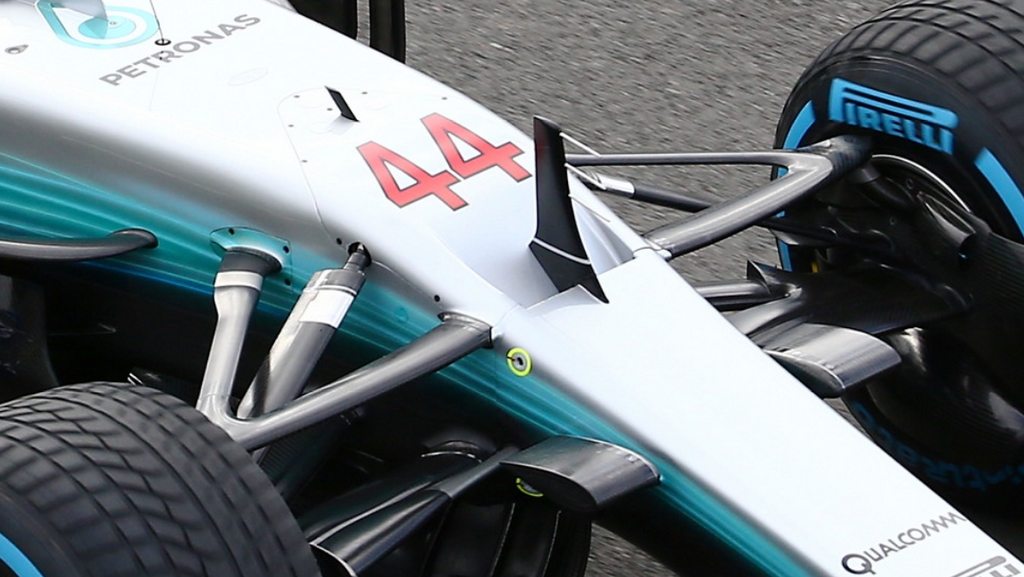 That is a disturbingly quick looking car, but looks can be deceiving. Let's see what RBR, Ferrari and McLaren have in store for us before we call it for 2017 already!

It certainly looks fast, and apparently Mercedes have come up with some interesting aerodynamic solutions towards the back end of the car. I'll also be interested to see whether they switch to a shark fin in the end or not. Overall, I'm also liking how the 2017 cars in general are looking; to me, they've got a more aggressive look than the last few years, which is good.

As far as the livery goes, I would've picked an option for "it's nice" or something to that effect if there was one, but as it is I picked the average option. I think it's actually quite nice when stationary, if generally a bit too subtle for my tastes, but I expect that it won't look as good at speed with the twisty cyan strands blurring together somewhat. It also, unsurprisingly, looks fairly similar to last year's livery.